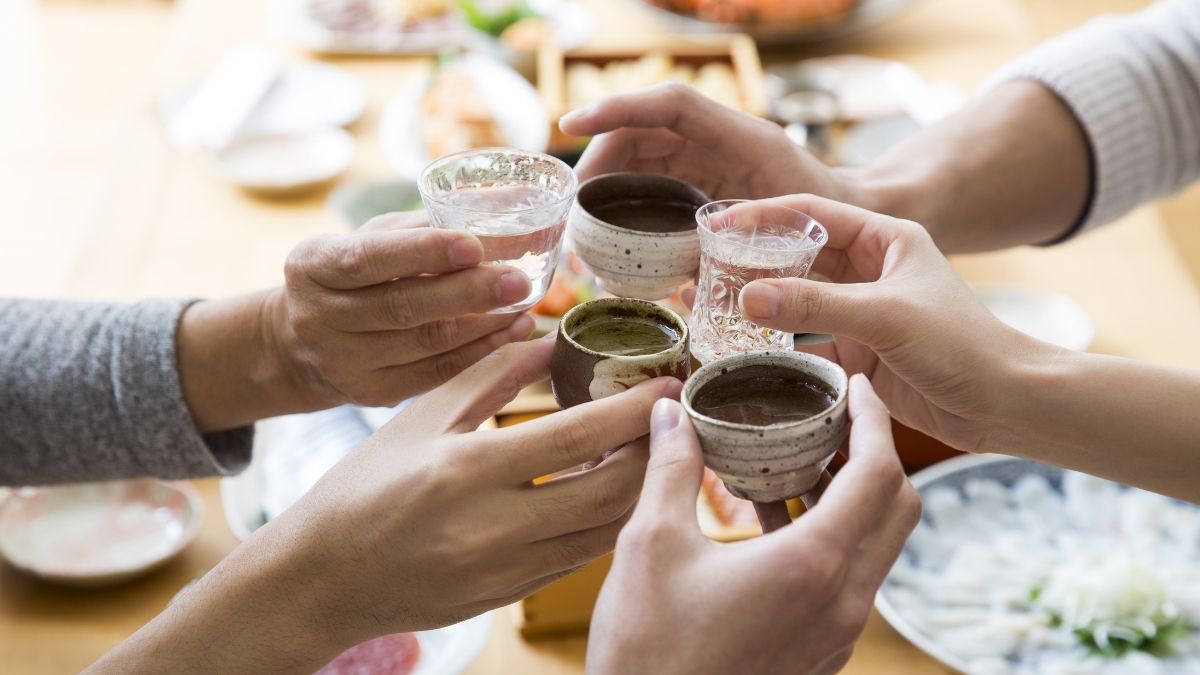 Most sake fans are familiar with Japanese drinking culture and the complex social protocol for toasting. It’s a country that prides itself on unbeatable etiquette, and the right ‘cheers’ is no exception.

So if you’re interested in Japanese culture, planning a trip, or you’d like to drink with Japanese friends, it helps to know the history of ‘cheers’ in Japan and the etiquette for drinking parties.

In this article, we’re diving deep into toasting culture in Japan, its history, and how to do it properly.

Related post: What Does Sake Mean in Japanese (and Why It’s an Impressive Drink)

How to say cheers in Japanese

The most common way to say ‘cheers!’ in Japanese is ‘kanpai’!

Kanpai means “empty the cup,” and it’s similar to the English phrase “bottoms up.” Kanpai is written with the Chinese characters “乾杯.”

(Yes, the Japanese use Chinese characters, although they have their own too!)

People typically say it in a group setting and almost always with beer or sake.

While it used to in the past, Kanpai no longer suggests that you need to finish your drink in one go. Drinking sessions can last the ENTIRE night in Japan, so it’s important to pace yourself!

Kanpai is now less popular among the younger crowd. Drinking habits are evolving, and the younger generation has adopted a more casual approach.

They’re much more likely to shout a more informal greeting like “Happy Friday” or toast to whatever holiday it is.

The History of Kanpai

Did you know that Kanpai originated from religious ceremonies where people used to toast to God and the dead?

Apparently, there were two main reasons for toasting:

Back in the middle ages, many believed that there were demons in alcohol, so you’d become possessed if you drank your alcohol without “cleansing” it. People started clinking glasses together and believed that the sound it made helped to shoo away the evil spirits.

This belief was not unique to Japan. People upheld it in many parts of the world!

2. To test drinks for poison

Murder by poisoning was interestingly common in ancient Europe. The idea was to toast and clink glasses together hard enough to spill your drink into that of your enemy’s. If they took a sip, as usual, it was safe to drink yours.

It’s said that it was around the end of the Edo period when Japanese people began to make toasts. The English and the Japanese made a friendship treaty around 1854. When the British Earl of Elgin visited Japan to finalize the treaty, he met with Japanese diplomat Kiyonao Inoue, an essential person in the origin of the word Kanpai.

The Earl of Elgin insisted that Kiyonao Inoue make a toast during the party since it was already a custom for British people at the time. Almost without hesitation, Kiyonao stood up and shouted “Kanpai” loudly, and it was an instant hit with the British crowd — they loved it!

So, why did Kiyonao choose the word kanpai for the toast?

Because he was already familiar with toasting culture in China at the time and was able to think of a new word on the spot quickly.

Kanpai isn’t all there is: Other ways to say cheers in Japanese

Nowadays, Kanpai isn’t the only word used when making a toast in Japan.

Less formal variations have come about, and it’s not uncommon to hear “Otsukare-sama desu (おつかれさまです),” which means something along the lines of “good job/work today,” “you must be tired,” or the like.

It’s important to note that “otsukare-sama desu” isn’t taken literally, and it’s more of a pleasantry. Hard work is valued heavily in Japan, so it’s a real compliment to say that somebody has worked hard.

As a matter of fact, Japan has one of the longest workweeks in the world, and with that intense work week comes a culture of heavy drinking. It’s normal for business relationships and negotiations to be forged over a night of heavy drinking.

But this hard work and heavy drinking come at a cost. Many people are dying from being overworked with poor health, and the Japanese now have a word for it — Karoshi, or death by overwork.

As the night progresses and drinks continue to flow, don’t be surprised if you hear the occasional banzai!

The term came from the Japanese battle cry “Tennōheika Banzai” (天皇陛下万歳, meaning “Long live His Majesty the Emperor”) and was eventually shortened to banzai.

As we’ve seen, Japan is a country bound by many strict social protocols, and the Japanese are often considered some of the most respectful and well-mannered people in the world.

Need we say that the culture of strict etiquette applies to drinking too?

While not technically required, it’s common for the ultra-polite to order what everyone else is drinking, typically sake or beer. This makes sharing more likely and improves the group dynamic.

The most basic etiquette for drinking in Japan is NEVER to take a drink alone while in a group setting. It’s best to always wait for the whole group to get their drinks before touching yours!

If the group is drinking the same thing, it’s customary to hold your cup with both hands while somebody else fills it. Filling each other’s cups is essential, and you should never fill your own. Everybody pours for those closest to them, with the younger of the group always pouring for the senior.

Typically, by the end of the night, you’d have poured for everyone at the table!

And don’t forget to wait for somebody to offer a Kanpai! before taking a drink! When clinking glasses during a toast, it’s good manners to make eye contact with somebody close. It can be seen as very rude if you don’t!

And one last thing: don’t order cocktails or mixers in a group setting. Instead, be a team player and order sake or beer like everyone else is (probably) doing. Your friends and colleagues will see you as well-mannered, and it’ll ultimately improve the entire group dynamic.

What to Do When You Don’t Want to Drink Anymore

Obviously, not everyone is made for heavy drinking.

So if you decide to tap out, albeit respectfully, of course, there’s little chance you’ll be given grief about it. While the Japanese observe strict social protocols and traditions, they’re also highly respectful and don’t aim to make others feel uncomfortable, much less cause a hangover! Causing anybody embarrassment for their lack of alcohol tolerance would be a MASSIVE violation of etiquette.

When you’ve had enough drinking, simply stop and leave your cup full so no one offers to fill it up — because they will!

Of course, you can still join in on the toasting and say Kanpai without actually drinking, and depending on how many drinks have been flowing, maybe nobody will even notice.

While it may seem silly to many non-Japanese people to toast with a full drink you don’t intend to drink at all, it’s an important cultural aspect for locals, especially the senior crowd.

While it’s fairly common to toast with water in the West, you must be careful to avoid it in Japan, even if you’re not drinking alcohol.

The Japanese give offerings of water to the dead, so they don’t get thirsty in heaven. Toasting with water means saying goodbye to people that have died, like a farewell.

So, if you’re at a business dinner or drinking party with friends and don’t want to drink alcohol, order soft drinks or a non-alcoholic mixer. Toasting with water could be considered akin to wishing bad luck, or even death, on somebody.

Some even believe that toasting with water wishes death upon yourself, as the liquid symbolizes your watery grave.

As we’ve seen, Kanpai isn’t used as frequently these days, and it certainly doesn’t suggest you need to empty your cup. But it still carries a lot of historical importance. Kanpai paved the way for Japan’s current drinking culture, and who knows how many relationships and negotiations would have never been made without it!

If you find yourself drinking with a young crowd, or you’re simply looking to keep the party or meeting fairly informal, a quick “otsukare-sama desu” or “good work today!” will suffice.

Drinking in Japan is essential for forging relationships, both personal and professional, and Japan’s impressive etiquette around drinking is part of the complex social protocol that makes the Japanese some of, if not the most, well-mannered people in the world.

Next time you find yourself enjoying a sake or beer with friends, be the first to offer a toast and let the drinks flow.