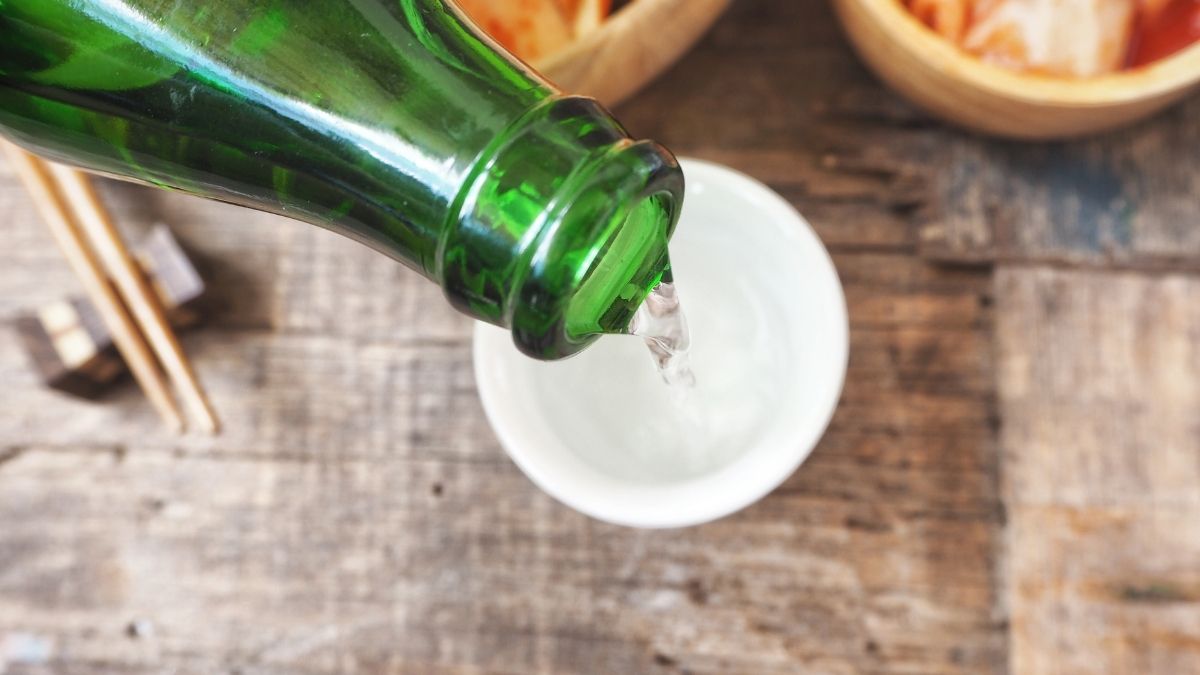 You’ve only just learned what sake is. And just when you were about to buy your first bottle, another term popped up: soju.

As if that were not enough, there’s shochu too. So what’s the difference between the three?

There’s no shortage of Asian alcoholic beverages in the west. Variety is growing every day, and sake is enjoying increased popularity in recent years as people venture into new flavor territory and try new things.

So, are soju and shochu simply other words for sake?

The answer is NO. They’re all similar in that they’re made from rice, but that’s about where the similarities end.

We’ve discussed what sake is in detail previously, but let’s take a look at sake vs. soju vs. shochu.

Sake vs soju vs shochu

We’ve said it many times, but here it is again, for the sake of sake newbies. (Pun intended!)

Sake (pronounced sah-keh) and often referred to as Japanese rice wine, is a brewed alcoholic beverage made by fermenting rice that has been polished to remove the outer portion of the grain. It’s said to have been enjoyed since at least the 8th century CE, but some historians believe the Japanese consumed it even BEFORE that.

It is brewed using sake rice, water, koji, and yeast. Koji is arguably the most important ingredient in sake production, and apart from the semai buai, or rice-milling percentage, it plays the most significant role in the quality of the final product.

Koji, also known as Aspergillus oryzae, is a fungus used in Japan to saccharify rice, sweet potato, and barley to produce drinks like sake and shochu. It’s also used to ferment soybeans for soy sauce and miso.

People call it rice wine, but that couldn’t be further from the truth!

Contrary to popular belief, sake shares more in common with beer than wine for its brewing process. Although, you could say that its flavor profile is more akin to wine than beer. Fine sakes are aged for a year or more, and most have an alcohol percentage of around 15%, except for Genshu—undiluted sake—which has an ABV of 20%+.

Soju is a distilled alcoholic drink from Korea. Its main ingredient is also rice (among other things), but it’s immediately different from sake in that it’s distilled, not brewed, and obviously, it’s Korean!

Unlike sake, soju can be made from other sources of starch such as barley or tapioca, even sweet potato. The colorless beverage is often called Korean vodka. And it makes sense – it’s clear, it doesn’t have a strong fragrance, and it BITES (though not as much as vodka does).

Soju is getting more and more popular across the world, and interestingly, it’s the most sold liquor in the world!

In some cities, Soju can be sold under a beer and wine license, which is easier to obtain than a liquor license. The neutral color and flavor mean it can be used in a variety of cocktails as well as being enjoyed straight.

There’s your substitute for the good ol’ vodka!

Shochu, on the other hand, is a low-alcohol distilled spirit from Japan (again!) made from rice, barley, or sweet potato. It originated in Japan at least 500 years ago.

Shochu is similar to Korea’s soju in that it’s distilled, clear in color, and has a similarly low ABV of between 25% and 30% on average. It’s also fairly neutral tasting, with some sweet notes depending on the starch used, and like soju, can be used in a variety of cocktails and other mixed drinks. In fact, many people choose to mix it with juice.

It shares a similar process to sake in that the beginning of the process starts out like brewing. A mash is made with koji mold which is fermented, often twice, and later distilled. Like sake, the koji in shochu is responsible for a considerable amount of the final flavor and overall quality of the drink.

High-quality shochu, called Honkaku Shochu, is single-distilled, which allows it to retain more flavors of the base ingredient. Hence, a shochu made from sweet potato will taste considerably different from one made from rice.

How does each of them taste?

As you saw above, these three drinks are considerably different in many respects.

The buds on your tongue will ascertain that ALL of them have a clean taste, though.

But the devil is in the detail.

Sake’s flavor is hard to describe since so much depends on the semai buai or rice polishing ratio. You could say that it’s clean-tasting and slightly sweet, with an astringency that complements. Its scent is slightly fruity and nutty and often compared to a milder version of wine’s aroma.

But depending on the style, the notable flavors and aromas can be COMPLETELY different.

On the other hand, the flavor of soju is usually more predictable. It’s clean with a neutral flavor that many people associate with vodka, although most soju is sweeter and less harsh than vodka. You’ll also notice a light astringency that balances the sweetness, which can vary depending on the starch used.

Sweet potato soju is sweeter than soju from other starches.

Shochu’s flavor profile shouldn’t be confused with sake. It’s usually less fruity, and, like soju, the overall flavor depends heavily on the starch used. You could describe the flavor as nutty or earthy.

Like soju but unlike sake, shochu can be made from sources of starch. If you’re a newbie, you might not be able to notice. But a seasoned shochu drinker will be able to tell whether it’s buckwheat, sweet potato, wheat, or something else!

Difference between sake and soju and shochu: how are they made?

The three drinks share similarities in their processes, especially soju and Shochu, but it’s the nuances that set them apart.

So it’s time to take a look at the manufacturing process for sake, soju, and Shochu.

How to make sake

As we’ve seen, sake’s main differentiator from soju and Shochu is that it’s brewed and not distilled. It has the lengthiest process of the three drinks, and its success relies heavily on the first step of milling.

Basically, you mill the rice grains, then wash them to get rid of the starch. Soak them in water, steam them, ferment them. Start the yeast with Koji, mix everything together, and let it sit for up to 4 weeks. Press it, filter it, pasteurize, and let it age!

This is the process in a nutshell, but there are gazillions of nuances and techniques that make it much more complex than it looks.

Complex enough that it makes no sense to try and brew some sake at home!

How to make soju

Originally, soju was another beverage made by distilling rice. That’s how it happened for centuries!

Until one day in the 1960s, after the Korean War, their government decided to ban rice distillation. It made no sense to use rice for alcoholic drinks when there wasn’t enough of it to eat! So they turned to other sources of starch: barley, wheat, tapioca. Those are still used today in production of soju, even though using rice for soju became legal again in the 1990s.

How to make shochu

How do you drink sake vs. soju vs. shochu?

Despite what many people think, you shouldn’t shoot sake. It’s made to be sipped on and enjoyed slowly.

As for whether you serve it hot or cold, a general rule of thumb is that higher-quality sake should be chilled slightly, and you should warm cheaper sake a little. Cooler temperatures of around 45F allow the full flavor profile to shine without masking any nuances.

Warming a lower-quality sake that may have a sweeter and fruitier body helps make some of the off-flavors less noticeable. In Japanese culture, it’s customary for sake drinkers to serve for one another.

Soju is often served neat or slightly chilled. You’ll usually get it in a small glass.

Similar to Japanese culture, it’s customary in Korea to serve one another, but NEVER oneself. (No solo drinking!)

Other aspects of soju etiquette include drinking the first glass as a shot. After that, you may drink slowly! However, do NOT look at your fellow drinker while having your shot.

Also, soju can be part of some popular cocktails. High-alcohol soju will be a great cocktails ingredient as the lower-alcohol varieties may get overshadowed by other ingredients.

Shochu is most often consumed on the rocks, mixed with water, or with juice, which lowers the ABV to around 12-15%.

Like soju, you can use shochu as a substitute spirit in a range of cocktails and mixed drinks. Connoisseurs of shochu will take advantage of the serving temperature to accentuate desired flavors. Because of the relatively neutral flavor, like soju, shochu pairs well with a variety of foods.

Sake is seeing increased popularity in the west over the last few years, thanks to improved marketing efforts and premium offerings from brands like Dassai, which is famous for their Dassai 23—which uses rice polished to 23% of its original size. Some other popular options are:

Interestingly, the brand Jinro is the best-selling spirits brand in the world. And soju is the liquor that sells most among their products!

Shochu is also seeing growing popularity in recent years for its versatility. It can be enjoyed either straight or used in a variety of mixed drinks, which means it’s approachable for most people. Here are some popular options worldwide:

As we’ve seen, sake, soju, and shochu are all great beverages made from rice, with soju and shochu also made from other starches. They all have a rich history and, consequently, different customs for being served and enjoyed in a group. You can use soju and shochu in a range of cocktails, but you should definitely enjoy sake on its own for the best experience.

All three offer a variety of flavors and alcohol percentages which means there’s an option out there for everybody. So, there’s no better time than now to get acquainted with a new drink!